I’ve finally, finally learned that, if I’m struggling, it’s likely because I’m trying to deal with what I wish was, instead of dealing with reality. If strapless dress had been dealing in reality yesterday, I wouldn’t have gotten chased down by a pug.

I set out for my run late yesterday afternoon. It took some convincing—some internal bargaining—but I finally won the argument with myself, laced up my shoes, and bounded down my driveway and up the street. I made it three blocks before I was accosted by a pug. That’s right. A pug.

“Stella*! Stella!” I heard someone yelling. Not frantically. Just as if Stella, whoever Stella was, might need some help refocusing her attention.

Out of the corner of my eye, I saw a wiggling, snorting black blur headed right for me. I heard tags jingling and quickly surmised that Stella wasn’t a wayward child. She was a dog. A dog with a keen interest in me.

I kept going as Stella ran as fast as she could (which really wasn’t all that fast) after me. By now, her person, who’d been sitting placidly on a blanket on her front lawn, was trailing Stella. I stopped. Because I am full of mercy.

The woman jogged up wearing a long strapless dress with a shabby chic floral pattern. Her hair was swept up in a bun. She was apologizing profusely. With as much good-will as I could muster, I assured her that it was fine. She tried to scoop up her dog, who by now had actually gotten distracted and was headed in the opposite direction in a sort-of-speedy mosey, if you will. Honestly, the way pugs move kind of defies description.

About this time, the male significant other of the woman in the floral, strapless dress walked out on the porch. He immediately started fussing: “Bring her back inside. She’s going to run right into traffic. Why do you have her out here anyway?”

I immediately got it: this woman wanted a lazy afternoon, laying on a blanket in the beautiful Atlanta spring weather, with her dog snoozing beside her. But this dog wasn’t the snoozing kind. By the guy’s reaction, I’m not sure the dog had been outside—like maybe ever. Certainly not to while away the day on a blanket in the sun.

Girl, I thought, you’ve got to learn to live with the pug you’ve got.

Wouldn’t life be so much easier if we all learned to live with the pug we’ve got? You think you don’t have a pug? Hold up.

Maybe your pug isn’t ACTUALLY a pug. I’ve had lots of pugs: 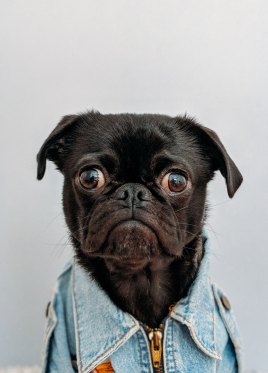 My personality: Probably about the 100th time I got scolded for being overly-sensitive as a kid, I started to wish I was different. Not so sensitive. I saw my sensitivity as a character flaw. My feelings always seemed so outsized. As I got older, I tried to take the edge off my BIG feelings with alcohol. Yeah. That worked brilliantly. (Not really.) But, after I got sober and sorted some things out, I began to embrace my sensitivity instead of fighting to change it. Now, I can see that it’s my sensitivity that allows me to connect with people and form relationships quickly. I got to reap the benefits of this oft-denigrated personality trait when I learned to live with the pug I’ve got (instead of numbing, or fighting, or denying).

My relationship: Do not tell Simon I called him a pug. But, for real, I increased my suffering exponentially when Simon transitioned by pining for what was instead of embracing what our relationship had become. I wanted to be married to a girl. I mean, I had been. Kind of. Not really. It was confusing. But I liked being a lesbian. It was a label I felt comfortable with, one that had described my reality for two decades. Now, suddenly, I was married to a guy. A real cute guy. But I just kept wishing for something different. I couldn’t even see Simon, for all my wishing for something different. Know what, though? When you don’t face the reality of what you’ve got, you risk your pug running out of your front lawn and right into traffic. Fortunately, I learned to live with the pug I’ve got (and embrace the hell out of that pug) before things fell apart. It was a close call, though.

My kid: I know, I know. I write about my kid’s utter amazingness all the time. But when Jane was in preschool, I wrung my hands constantly over her being a follower instead of a leader. She had this frenemy that seemed to have complete sway over her. Jane and this frenemy would gang up on the other little girl in their dysfunctional triad. Then, later on in the week, the frenemy and the other girl would be mean to Jane. I was in a tizzy. Was I raising a mean girl? Why couldn’t Jane take control of this situation? But, in order to address the frenemy situation in a meaningful way, I had to learn to live the pug I got. So, I started addressing Jane just as she was, at 4 years old, instead of addressing the 17 year old I hoped she’d grow into one day. I looked at the ways she was hurting. I saw her confusion and frustration. Once I clearly saw reality (the places she needed to be built up, the character traits that needed positive reinforcement), I could deal with Jane as she was. And you know what? She still talks about the lessons she learned from that first frenemy relationship.

I’ve finally, finally learned that, if I’m struggling, it’s likely because I’m trying to deal with what I wish was, instead of dealing with reality. If strapless dress had been dealing in reality yesterday, I wouldn’t have gotten chased down by a pug.

Maybe we could just all agree to try a little harder to learn to live with the pugs we’ve got.

*Name changed to protect the not-so-innocent.