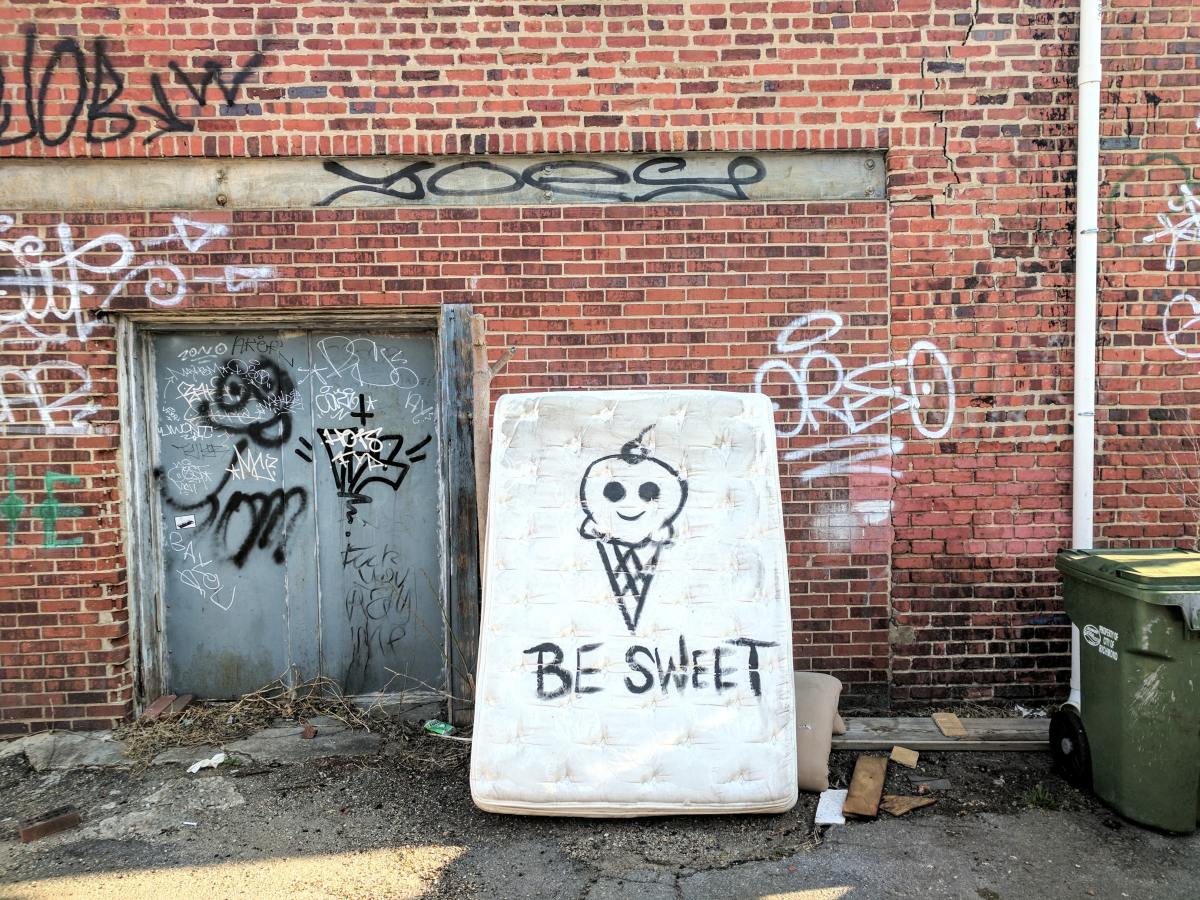 In a stairwell in college, traipsing up to the third floor after dinner, a boy who’d been hanging around a whole lot decided that then and there was the moment to profess his feelings for me–over his shoulder as he bounded up flights of stairs in front of me.

It was too warm in that stairwell. His words bounced off each other in an echoey cadence, drowned out by our footsteps. I could see just a glimpse of him as he loped up the stairs, lanky and buoyant. He’d decided to grow his hair out, so it was pinned out of his eyes by two blue barrettes. I thought he was kind of weird–in a time when I had little use for weird. And–although I’d later realize I could be completely mesmerized by women of all sorts–my taste in guys has always veered steadily toward lumberjack. Which he had not one iota of in his entire person.

And, if none of this sounds particularly kind, well I wasn’t always. Especially then. And, more especially, in my own head.

What I was was all kinds of uncomfortable. Not because I felt threatened. But because I didn’t like him. And now I was stuck face to face with knowledge I didn’t want.

But the frailness of the male ego had been drilled into me. Men got coddled where I came from. And it was always “sweet” that a boy showed me attention. Even if I didn’t want it.

So, I giggled. Because I was being nice. Right? Sparing his feelings and all. Truth was, I had no idea what to do. But being forthright and honest never once crossed my mind. I just wanted to evade and disappear without really ruffling any feathers.

What the actual hell?

Being nice is a sham. I was taught to be nice so that other people didn’t have to square off against truths that made them uncomfortable. Being nice reinforced a passive-agressiveness in me that was near legendary by the time I’d finish grad school. Being nice kept me mostly stifled on the outside while confusion, rage, and sorrow roiled on the inside. It kept me silent.

And, as Mr. Blue Barrette’s response would inform me, being nice isn’t the same as being kind. Because my giggle, which was supposed to spare his feelings–and (more importantly to me) help me avoid a conversation I perceived as conflict–pissed him off.

Sure, his timing might have been shit. But apparently, this kid had been screwing up his courage to tell me that he really liked me. We were 18 years old, playing adult, navigating hoards of new people and experiences. He was doing the best he could. And my response reflected nothing back at him that was true or honest. And he knew it.

He paused his loping to stand on the stairs half a flight above me and look me in the eye. “I’ve been waiting all this time to tell you that I like you and all you do is laugh?? What the FUCK??” And he loped away. Like off into the sunset. I never saw him again except in passing.

I stood there, stung. I caught my breath, the whole time my thoughts spinning into a web of victimization (which I was also practically valedictorian of): I was trying to be nice to him. How could he be mad at me? He made things hella uncomfortable. I was just trying to not make him feel bad. And now he’s mean to me?!? That’s some bullshit.

Years would pass before I’d discover the difference between being nice and being kind. Nice is a passive pleaser, something to smooth things over no matter what lies underneath. Kind is thoughtful, direct, and honest. Nice is a gag order. Kindness is unity and love.

Turns out, it’s nice that’s really some bullshit after all.