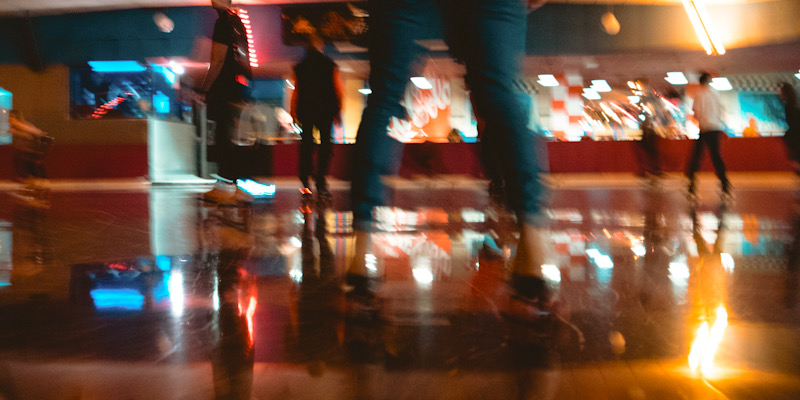 My first boyfriend’s name was Jon Robinson. We were 8 years old.

He was cute, best I remember. And pretty nice. Nice enough to inform me that no, you couldn’t get pregnant just from kissing. Apparently, I’d snuck too many episodes of Days of Our Lives, where the timeline between lots of kissing and having a baby was fuzzy at best.

And it was me that asked to kiss him, for the record.

My clearest memories of him, though, are at the skating rink.

I’ve never been a particularly skilled skater. But what I lack in finesse, I make up for in enthusiasm. The thrill of getting going fast enough to feel a breeze on my face always eclipsed the very real fact that I wasn’t great at stopping. By the time I was 8, I’d (mostly) stopped slamming myself into that little carpeted wall by the DJ booth to come to a stop. But I wasn’t above coasting up to it and casually bumping into it.

I’m sure I looked super suave.

But the thing about flashing lights and loud music is that you can kind of escape yourself out there in the swirl & twirl of it all.

Eight was a liminal age for me. We’d just moved to South Florida, and I felt (relatively) popular because I was the new kid. People found me interesting. I swear 80% of my school hailed from New York originally, and I’d moved to South Florida from Gainesville. Florida. Where there were cows.

I was blissfully unaware.

So, I skated with John Robinson. And we’d laugh and wave at each other. We were at the skating rink on a school field trip, so the place was packed with 3rd graders feeling really grown with money to buy junk from the snack bar.

Third grade was the year before I felt self-conscious all the time. So I just got to be. And to enjoy skating (even if I wasn’t that good at it). And to wave at a cute boy and giggle when I saw him fly around the rink with his friends.

I remember him being both adorable and particularly good at skating–but who knows? I’ve learned, as I’ve gotten older, that memories lie.

2 things happened on that skating trip that I remember as if they happened just yesterday:

I got to couple skate with John Robinson while “The Inspiration” by Chicago blared in the background. If whipping around the rink solo is fun, it’s doubly fun when you’re attached to someone else by a sweaty palm, going faster than you’d imagined possible. It’s terrifying and exhilarating. And if I close my eyes and focus really hard, I can conjure it all back up.

Then, right after that legendary couple-skate, John Robinson pulled me aside, over by the lockers where everyone stashed their stinky ‘Roos. I thought maybe he was going to kiss me (why I was so obsessed with kissing at 8 years old is a topic for another time). But, instead he took my hand and looked at me extra-sincere like.

I know you’re thinking that we’re about to get to the really cute, puppy-love part of the story where he tells me how much he likes me. Or whatever 8 year olds do.

And it started out well: he told me how pretty I was (feminist or no, I am a sucker for being told I’m pretty. Always have been). And then he looked even more sincere.

I remember my heart pounding against my chest.

“You’re really pretty, but why do you dress like that?”

I looked down. I was wearing my favorite quarter length sleeve sweater, with dark purple trim and rainbow colored stripes running through an off-white background. I loved that sweater.

“You’d probably be popular, if you just dressed more like everyone else.”

I mean, sure, I was still wearing homemade dresses on occasion. And I had to fight my mom about culottes all the time (which she though in some way were “pretty,” a mix between a utilitarians short and an impractical-for-school skirt. Let’s be clear: they were ugly AF), and sometimes she won.

But, here I was in my favorite sweater… and it was, well, wrong. Apparently.

I think I told him I’d try to do better. I’m not sure. It gets a little hazy after that. But I do know that I never felt quite the same about Jon Robinson. There’d been a subtle power shift. The feeling like itty bitty electrical currents when I was close to him was replaced with the subtle knowledge that he was doing me a favor by being my friend. That I was in some way jeopardizing his status as a “cool kid” with my presence, and I owed him gratitude.

I wish I walk up into that skating rink and hug my 8 year old self. And tell her she’s enough, as-is. That being cool isn’t everything. That she still won’t be cool at 45, but it won’t matter to her one iota. But I’d sure tell her to fight her mama harder on those culottes.

And, if I could, I’d couple skate with her. But we’d skate to Whitney Houston. I think y’all know which song.